Truth is Stranger than Fiction

Amy Levinson: Matt, would you talk a bit about the genesis of this project?

Matt Shakman: Shortly after the death of Richard Lancelyn Green, David Grann wrote an amazing article about the case in The New Yorker called “Mysterious Circumstances: The Strange Death of a Sherlock Holmes Fanatic.” I’m a big fan of Grann’s, so I pay attention to anything he writes because I know it will be an amazing true story. Mysterious Circumstanceswas that, and then some, because it had the added factor of Sherlock Holmes, a subject I’m passionate about. It stuck with me after reading it and I wondered, “Is this a film, a TV show?” I wasn’t sure. It wasn’t until a few years later that it occurred to me that the best way to tell this story was through theater since the play needed to enter fully into the imaginary life of the central character. The Geffen Playhouse worked with me to option the article and we found the perfect writer. Enter Michael Mitnick.

AL: And Michael, how did you become involved in the project and what attracted you to the material?

Michael Mitnick: After Matt optioned the article, he met with writers to see who might be interested and share the same vision. I did a lot of begging. In truth, the moment I read the original article I was hooked. I’m fascinated by the difference or non-difference between a scholar and a fanatic. I have a few collections that border on obsessive — magic ephemera and other embarrassing things. Still, I felt I understood the nature of a person like Mr. Green. The central question to me became: can falling in love with an idea be as strong or stronger than falling in love with a person?

MS: And you were able to perfectly capture this story of love bordering on madness and to explore the delicate line between those things. Here’s a man [Richard Lancelyn Green] who loved something so completely that it led to his own death. So, at the heart of it, it’s a love story between a man and an author and a character. And it’s important to recognize that there’s as much validity to that kind of love as there is in a love between two people.

AL: You brought up magic ephemera — without giving anything away, this production has various types of magic built into the story. Why did you feel those elements belonged in this particular story?

MM: While theater asks us to suspend our disbelief, magic commands it. Otherwise it’s not a successful trick. It compels the element of surprise, which is crucial to drama. The playworld of Mysterious Circumstances is bursting with surprises, so magic felt like a natural and novel approach, as opposed to something a bit more traditional.

MS: One of the first things we talked about was the story’s inherent theatricality. Green retreated from the real world and lived in a life of the imagination. How do you get to know someone who doesn’t really want you to know them? We thought the answer was to try and see his life from the inside out. So it made sense that Sherlock Holmes would investigate the death of his own expert. And magic seemed like an ideal way to express the interior life of Green. I personally love magic, and we do a bit of it here at the Geffen because it’s an ideal metaphor for what theater is trying to do. As Michael said, it demands your suspension of disbelief, and, if done right you, fully give yourself over to a theatrical experience. We use magic to see the world through Green’s eyes. In his everyday life, he might pass you in the pub and be unable to even say hello, but in his mind he is capable of solving any crime in the world.

AL: Because this is inspired by a true story [as detailed in David Grann’s article “Mysterious Circumstances: The Strange Death of a Sherlock Holmes Fanatic”], how do you navigate truth vs. fictionalization for dramatic purposes?

MM: It’s difficult. Richard Lancelyn Green was a real person of flesh and blood and there are many living people who knew and loved him. I feel a sense of duty to him. At the same time, it isn’t documentary-theater. The play must be absorbing in its own right and the fact that it was based on a true story is the icing. So, timelines have been condensed, some hyper-specific details changed for narrative purposes. It’s just about where to draw the line. I’d like to think that people will leave the play feeling that they received, essentially, the full story and the truth. But the article will always be there for folks who want to know exactly what was “in the lost box.”

AL: I know that people have their favorites when it comes to the Sherlock stories. You have a few woven into the play. Why did you select the ones you did?

MM: On a practical level, having chosen a version of Conan Doyle who lives in 1894, I had to stick with the first half of the Sherlock canon. Also, we circled a particular story called “The Problem of Thor Bridge” whose plot closely mirrors the events surrounding the death of Mr. Green. It’s a story that is discussed, deciphered and batted back and forth over the course of the play as a possible solution to the protagonist’s death.

AL: The infusion of magic into this already large play must have involved many collaborators. Would you talk about the design process and partners who helped create the production?

MS: Behind all great magic are many magicians. To bring this world to life we needed a scenic designer who knew the world of illusion inside and out. We found in Brett J. Banakis — who was a co-designer on the Harry Potterplay that’s taking over the world — someone who has intimate knowledge of black art and magic. We partnered with David Kwong and Francis Menotti, who are fabulous magicians, to design the illusions you see in the play. They have also trained us in sleight of hand and misdirection, which we employ in the staging. And our costume designer E.B. Brooks is a magician in her own right, figuring out how to take six actors and turn them into the entirety of London in 1894 and 2004. Working with this team has been a blast. 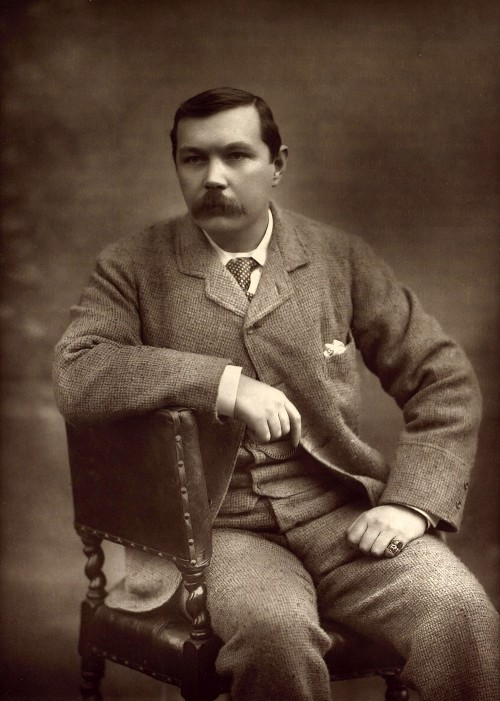 In March 1886, Sir Arthur Conan Doyle started writing a novel that would change his literary career, and indeed his life, forever. Initially entitled A Tangled Skein, it featured two main characters by the names of Sheridan Hope and Ormond Sacker. Two years later, the novel was published in Beeton’s Christmas Annual, under the title A Study in Scarlet and Hope and Sacker were transformed into Sherlock Holmes and John Watson.

From 1887 to 1893, Doyle wrote numerous Sherlock stories but grew frustrated since he believed them to be trifles. Wishing to devote more time to his historical novels, Conan Doyle did the unthinkable and killed off Holmes in The Final Problem (published in 1893, but set in 1891). Legend has it that fans were so distraught about Holmes’ death that they wore black armbands in mourning. So began what was known as The Great Hiatus. Conan Doyle did as he had promised and focused on what he deemed more serious work — British history and poems.

Finally at the end of eight long years, he caved to popular pressure and wrote The Hound of the Baskervilles, a story that predated Sherlock’s death. In 1903, Conan Doyle wrote The Adventure of the Empty House (set in 1894), in which Holmes reappears. Holmes’ explanation to Watson is that he had faked his death to deceive his enemies. This story would mark the beginning of the second set of Sherlock Holmes stories. 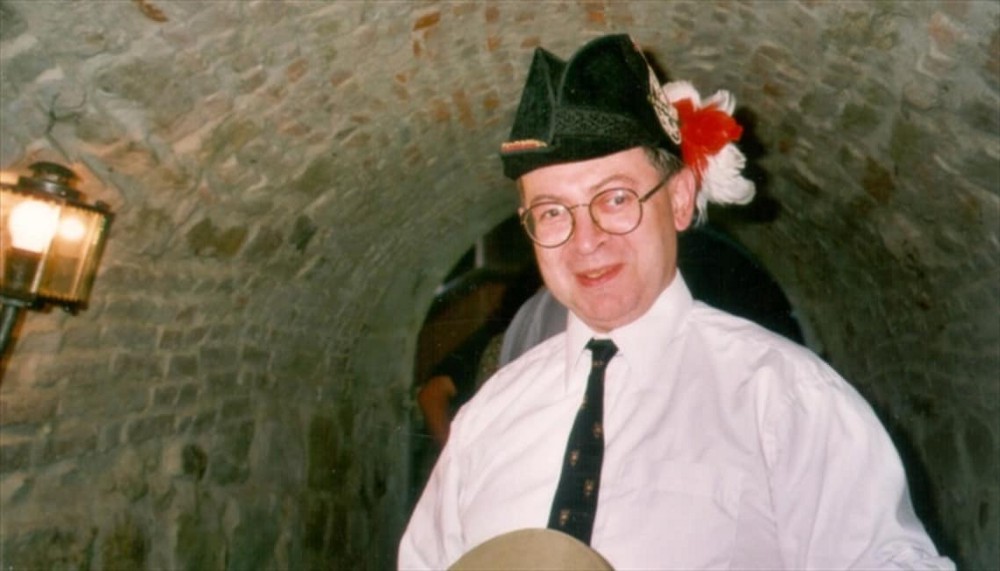 Richard Lancelyn Green was considered one of the preeminent scholars of Arthur Conan Doyle and Sherlock Holmes. His passion for the subject began at age seven. By the time of his premature death in 2004, he had amassed the largest private collection of Sherlockiana that has ever existed. His fervor encouraged a nearly encyclopedic knowledge that made him well-respected among his scholarly peers. He co-wrote the complete bibliography of Arthur Conan Doyle and numerous collections of Doyle’s work that had never been published in book form. Most famously, he curated a book entitled Letters to Sherlock Holmes, a collection of letters that had been written to Sherlock Holmes and arrived at the headquarters of the Abbey National Building Society (the address closest to the fictional 221B Baker Street address where Holmes and Watson presided).

Green was the chairman of the Sherlock Holmes Society from 1996–1999 and was known to dress as a 19th century music hall master of ceremonies when the society donned period costumes and made pilgrimages to Reichenbach Falls, the location of Sherlock’s untimely death at the hands of James Moriarty. Green died under strange circumstances in 2004 — as it was unable to be ruled a murder or suicide, the case remains unsolved. The subject of Green’s life’s work and the circumstances surrounding his death caught the attention of writer David Grann, whose investigative narrative inspired this play.