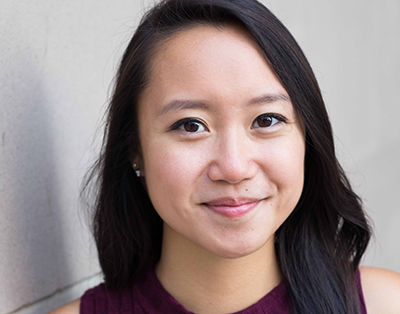 A Chinese-Canadian writer and director, Chloé Hung is a graduate of the M.F.A. in Dramatic Writing program at NYU Tisch. Chloé’s plays include All Our Yesterdays (Toronto Fringe, Next Stage Theatre Festival); Issei, He Say (world premiere at New Jersey Repertory Company); Three Women of Swatow (ppcoming world premiere at Tarragon Theatre in March 2020). She was awarded the RBC Emerging Playwrights Award. Her plays have been workshopped in Toronto, New York, Washington DC, Banff, Philadelphia, and Los Angeles. In the world of television, she has written for Cherish the Day and Queen Sugar (both created by Ava DuVernay, for OWN). Her short film Signal received funding and mentorship through the Women In Film production lab. She is developing a television pilot, Banana Kids, with Insurrection Media. She workshopped her screenplay, A Glimpse of Sun, with The Black List’s screenwriting lab. When she’s not writing, she’s likely baking pies and cookies.