Is it Okay to Laugh?

An Interview with Playwright Larissa FastHorse

Amy Levinson: What inspired you to write the play?

Larissa FastHorse: I’ve written a lot of plays, and prior to The Thanksgiving Play they have almost all had Native American characters in them. I’ve been told again and again by the American theater that it's impossible to cast Native American actors, even in cities like Los Angeles where we have the second largest urban Native population in the nation. But I also know that when my plays are produced, they do well. People are interested in these issues. So I said, alright American theater, I’m going to write you a play with four white-presenting people in one room about Native American issues, and if you can’t produce that, then the issue isn’t casting and we’ll have to talk about what real issue is. Now this play is my most depressing success. The good news is, I love the play and it says all the things I want it to say. I’m thrilled that so many people are seeing this play, but it is a little disturbing that I had to go about it this way.

AL: While the play is undoubtedly a comedy, you are dealing with issues of marginalization. How did you establish the right tone to balance these two truths?

LF: I often call it a comedy within a satire, because it is a satire but the comedic bits are the sugar that helps the medicine go down. The comedy is intentionally placed where it is to help us take a breath and relax — and it’s aimed at everybody. No one escapes. I also want us to have fun together. There’s a joke near the beginning of the play that makes the whole audience laugh together. I call it “the unifying joke.” Every night, at that moment when I hear the whole house laugh together, it’s the best feeling in the world, because live theater is the only place that can happen.

AL: The play is being produced all over the country, but now you’re in your hometown. Do you have any expectations or hopes in terms of how this particular audience receives the play?

LF: It’s going to be fun! While it’s intentionally not set in Los Angeles, a lot of it is about Los Angeles. As someone who has lived here most of my adult life, I know that Angelenos love to laugh at themselves. We are totally down with being the butt of the joke and even enjoy it. We did two early readings of the play here and it was great to watch Angelenos see themselves, know themselves, and laugh at it. Then there’s an uncomfortable moment of, “Should I be laughing?” Those are my favorite moments in a play, when you are laughing and then you’re not entirely sure you should be.

AL: You and Michael John Garcés [director of The Thanksgiving Play] have collaborated numerous times, often in non-traditional theater settings. What do you find most rewarding about working with him?

LF: I love working with Michael. Personally, he’s the big brother I never knew I needed. Professionally, we have collaboratively created three immersive theatrical pieces together with Cornerstone Theater Company. “Collaboration” can mean so many different things, but between the two of us it means working without ego. We are always pushing for the best idea in the room and open to wherever it comes from. We have very different personal backgrounds and ways of approaching theater, and that forces my work to be interrogated in ways that I can’t do on my own, and I do the same for him. Another of my favorite things about Michael John is the way he works with the performers in the room. Even when he is conducting auditions, he encourages everyone to bring their A-game in a way that isn’t obvious or aggressive. He constantly lays a path for others to do their best work, including me.

AL: Can you talk a little about the interstitials that are in the play? How did you select them and where did you find them?

LF: I grew up in South Dakota at the time of what was called “reconciliation” between the state and the Lakota people — who are my people. We didn’t have Columbus Day, we had Native American Day. Thanksgiving was about harvest, and it’s an agricultural state, so that made sense. We never did pilgrims and Indians, we never did pageants or any of that. When I started writing this play, and realized I wanted to write about something universally American, I landed on Thanksgiving. But when I started doing the research for this, I was horrified by the pageants and school programs that people not only did historically, but are still doing today. I knew I had to incorporate them into the play so I created the interstitials as “inspired by” amalgamations of educational websites, teacher Pinterest boards, and parent videos. They are horrifying. It’s so important for us to remember that this is what we’re doing to children — we’re indoctrinating them into this way of thinking about Thanksgiving and history. We’re creating this false reality of what history is supposed to be, that’s based on practically nothing when you do the actual research. By the time they’re adults, they accept it as fact, without ever looking into the reality of what this holiday is and where it came from. 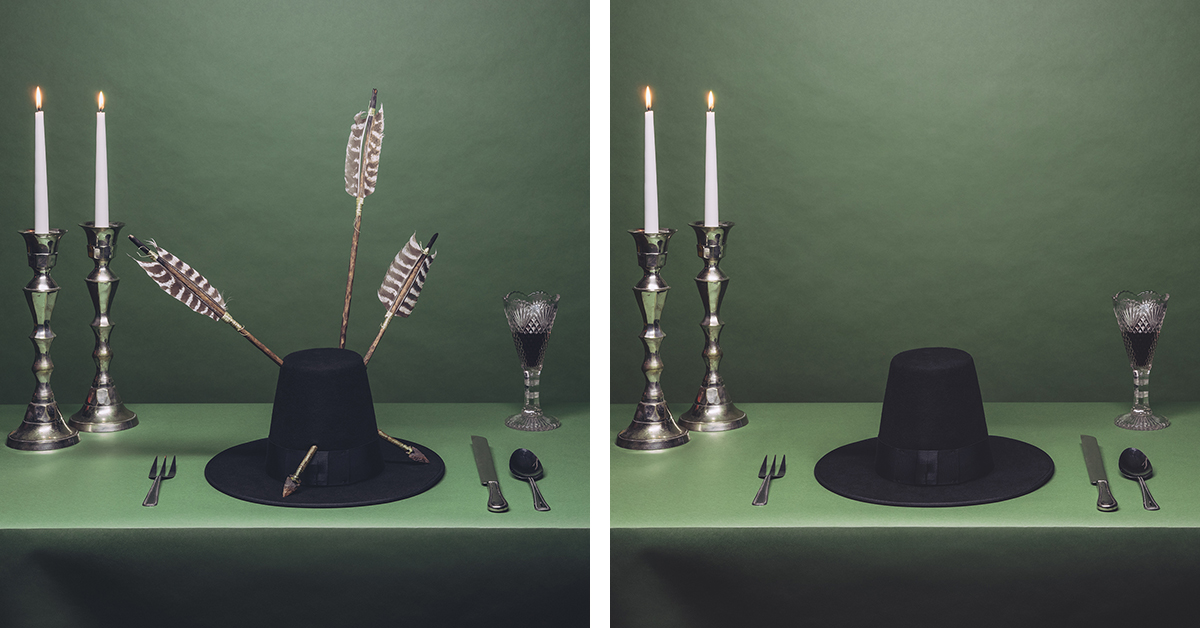 AL: We had a life-imitates-art moment with the original poster for this show, when you received a message from someone who was offended because it was quite similar to the divisive old Massachusetts Turnpike sign from the 1980s. As a response, we decided to remove the feathers and arrows that were pierced through the pilgrim hat in the original image. We couldn’t help but recognize the irony, given the subject of your play. What were your thoughts on this situation and how do you feel about the solution that we came up with to address the concern, which was to remove any suggestion of indigenous people in the image?

LF: It’s so complicated, right? I have to say Michael John and I both experienced glee that this happened to us, because this is what the play is about. We “woke” people approved the original image. Geffen included us in the design process and when we saw the art, we thought, “This is great! It’s ironic, it’s fun, it says everything.” We had no idea that we were stumbling into something that was hurtful to indigenous peoples who worked hard to get rid of that image [in Massachusetts]. Then this very gracious Indigenous woman reached out, and said, “I understand it’s art, but do you know what this image means to us?” First, of course, we all felt horrible, and she was so kind, not demanding anything, but just saying, “Hey, you might want to know that this image causes some people pain, and we went through a lot to remove it.” Of course, the last thing any of us want to do is cause damage to Native American people — further damage. The current idea that we came to through many meetings and discussions about this — to remove the arrows from the image so there isn’t anything indigenous left — is kind of perfect in a horrible way. Institutions constantly say, “Natives issues are too hard, so we’re just not going to participate in them.” That’s what I deal with every day. I think this was a good compromise, and I love that we’re facing it head on and talking about it, and admitting that the best intentions don’t mean anything when the impact is negative. That’s really what the whole play is about. But to do something, and make a mistake, and own it, it allows us to move forward having learned something. Everybody coming into this show or going to the website is going to learn about this history, and how awesome is that? But we couldn’t have done it if you were too scared to do this play in the first place.

AL: Or too scared to admit we were wrong.

LF: Exactly! Or erased the image and never said anything, or left it as it was. But to be able to say, “We screwed up and now we need to find a different way forward” — that’s an incredible, wonderful opportunity that I wish more theaters, more people for that matter, would embrace.