When you think of superheroes, you probably picture them in comic books or Marvel movies. In recent superhero movies, we’ve seen characters like Spider-Man, Iron Man, Captain America, and the Hulk come to life through a complicated process of computer-generated imagery and impressive stunt work in front of a green screen—a process that takes years before a film ends up on the big screen. For self-proclaimed “geek theater company” Vampire Cowboys, however, heroes in comic book-style stories are brought to life in real time mere feet away from their audience.

Vampire Cowboys’ mission is to create and produce new works of genre-bending theater with an emphasis on action/adventure and dark comedy. Their shows bring in audiences with spectacle and action and then knock them out with thought-provoking stories—challenging their perceptions on race, sexuality, and gender—and can feature anything from spaceship dogfights to motorcycle chases to puppet rap battles to countless martial arts fight sequences.

But how did Vampire Cowboys originally cut their teeth in New York’s theater scene? Rewind to the spring of 2000, when co-artistic directors Qui Nguyen and Robert Ross Parker met as graduate students in the theater program at Ohio University. With their first collaboration, Vampire Cowboys was born. As they brought other talented artists into the company, the first few years of Vampire Cowboys were spent out of the spotlight, trying to gain footing in the competitive New York theater scene. In 2003, Qui Nguyen met his now-wife and Vampire Cowboys producer/managing director, Abby Marcus. Soon, thanks to Marcus’s effective grassroots marketing efforts, Vampire Cowboys began to draw more and more attention. In 2007, for example, Marcus arranged for Vampire Cowboys to show off their stage combat skills at the second New York Comic-Con to promote their superhero play Men of Steel.

Vampire Cowboys quickly found audiences who were tapped in to the subcultures woven into their shows, including gaming societies, creators of comic book podcasts, sci-fi fanatics. They staged main season productions, as well as a program called “First Bite,” which gave audiences a sneak peek into the development of plays that would later be fully staged. For actors and fans who wanted to hone their chops in stage combat, Vampire Cowboys offered The Rabid Vamps Fight Intensive, a class that provided fight conditioning, essential martial arts for the stage, nun chuck fundamentals, and more.

This bold, cutting-edge theater collective soon became widely known for their innovative work, building a loyal New York City fan base and gaining recognition and renown. Vampire Cowboys shows—complete with music, puppetry, stage combat, and more—are experiences that can’t be found anywhere else, and audience members would often see a show four or five times in a run. They were awarded the Caffe Cino Award by the New York Innovative Theatre Awards for “consistently producing outstanding work” in 2006, and won the prestigious Village Voice OBIE Award Grant in 2010.

The world last saw a Vampire Cowboys’ production in 2015 with Six Rounds of Vengeance at New Ohio Theatre in New York. That same year, playwright Qui Nguyen rose to national prominence with his play Vietgone, which went on to win numerous awards (2016 Steinberg Award, 2016 LADCC Ted Schmidt New Play Award, 2016 Kennedy Prize Finalist) and was produced around the country. Nguyen has since become one of the most lauded and sought-after contemporary American playwrights, as well as a writer for Marvel and Disney. 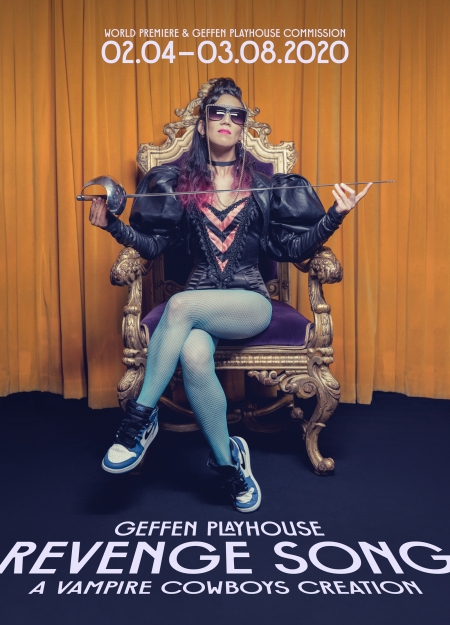 A rousing, romping, music-filled look at the real life of Julie d’Aubigny, a queer 17th century French swordswoman and opera singer, Revenge Song is a heroine’s journey toward self-discovery and acceptance. Though the play is set centuries ago, its story is electrifyingly modern. In this world premiere Geffen Playhouse commission, conversations about gender and sexuality combine with the outrageous fun and superhero style of the Vampire Cowboys to create something entirely singular—a hilarious, historical comedy with epic fight scenes and a punk rock attitude.

As the thrilling debut of the Vampire Cowboys into the Los Angeles theater scene, Revenge Song will have its world premiere at Geffen Playhouse on February 13, 2020 in our Gil Cates Theater. It’s one you won’t want to miss!