John Lee Beatty is one of the most renowned artists in the American theater. A two-time Tony Award winner, he has designed 115 Broadway shows and countless Off-Broadway and regional productions. After designing the Geffen’s productions of The Country House and Time Stands Still, he returns to bring us into the world of a tropical hotel for Jeffrey Hatcher and Andy Garcia’s world premiere adaptation of Key Largo. Early in the rehearsal process, we sat down to chat about his start in theater, the steps of designing a set, and the unique challenge and opportunity of creating a hurricane on stage.

You have such an incredible career. I’d like to go back to the very start — how did you get into scenic design?

When I was in first grade, my parents took me to see Mary Martin in Peter Pan downtown at the Los Angeles Philharmonic. I came home, and of course, I wanted to fly and all that stuff, but I actually totally got scene design. I understood how the scenery worked — to this day, I can imagine that set and the ground plan. My parents hoped I’d be an architect, but I kept designing. I know this is odd, but I started designing in first grade and have continued.

Did you ever build anything that you designed back then?

Oh, yes. I had an arts complex in our garage. I had a proscenium theater with flying pieces, and I built miniature sets that I would scoot across the stage to have set changes.

For someone in our audience who has never heard about how a set actually gets onto our stages, how would you describe the process of scenic design?

It’s an odd combination of literary appreciation and art. As a set designer, you read a script and somehow you begin to inhabit it in a way that you don’t quite understand. A lot of it is intuitive. At some point, the script gives you a visual clue — I call it secondary thinking or associative thinking. You get a feeling for what kind of movement the actors are going to have or what kind of enclosure feels appropriate to this specific play. You’re always dealing with the specific event. You don’t say, “Oh, it takes place in a house, so I’ll take house plan #4 and do it again.” It doesn’t work that way. It’s very much an emotional connection and it remains that way through the process to me. In the theater, with the lighting designer and the sound designer and costume designer and props people and painters and everybody, we’re all dedicated to something that moves you just by the way it looks and the way it functions. I’m essentially making an emotional connection to the material through the script.

Amy Levinson, who is the Associate Artistic Director here and is also a dramaturg, always says that designers are great dramaturgs — it’s all about how you convey that story to the audience.

Yes, right! Sometimes I don’t think people realize it, but I often start earliest of anybody — with the director, obviously. A lot of beginning dramaturgy comes out of those meetings. I really pull the play apart. I read a play once or twice just to experience it, and I don’t especially think about the scenery. I mean, you can’t miss it when in Key Largo they say, “The hurricane hits.” But I actually read a play first as a piece of literature. Then the next time through, I read it in a merciless manner. Like a surgeon, you pull it apart in bits, dissecting. I make lists of questions: “Well, they said they came in this door. Why are they going in this door if they said they were going down to the beach? Wouldn’t they come out the other door?” Things like that — a lot of important but oddly dry questions. I’m concerned as much as with how the scenery functions in a floor plan with the actors as with what it looks like. That all grows together at the same time. I’m doing floor plans and doing pictures, if you will — renderings, we call them — at the same time. I never do one without the other. There’s a physical reality and a physical dream world that are always related to each other. I always say that if a floor plan looks good, the scenery will look good in the same way — they need to match. You don’t get a floor plan that doesn’t look like Key Largo with scenery that does — they match. In this particular case, oddly, the script suggested an octagon to me. Examining the script, we’ve got two major characters with moral crises in their lives. This meant that the place the first one enters had to be diametrically opposed to where the other one enters. So, we have two very strong entrances that are different but equal. I’m trying to match the script with the visuals — not just the pretty picture visuals but also the literal layout of the show.

I’m fascinated by what you said about how so much of the process is intuitive at this point. How much of the ultimate design comes from that first impulse versus what you figure out along the way?

I’m not always sure, because, as you say, it is intuitive. I’ve worked with directors who talk about the script entirely and have dissected it in every way, and I’ve worked with directors who literally never mention the script in our meeting — who talk about their love life or what they had for dinner or politics or something. Yet, a design comes out of both methods. A few words can conjure up something for me, and I’m off to the races. I do research, of course — in this case I did look at fishing resorts in Florida — but a little bit of research goes a long way. I’d rather have one wonderful picture that inspired me than a hundred. 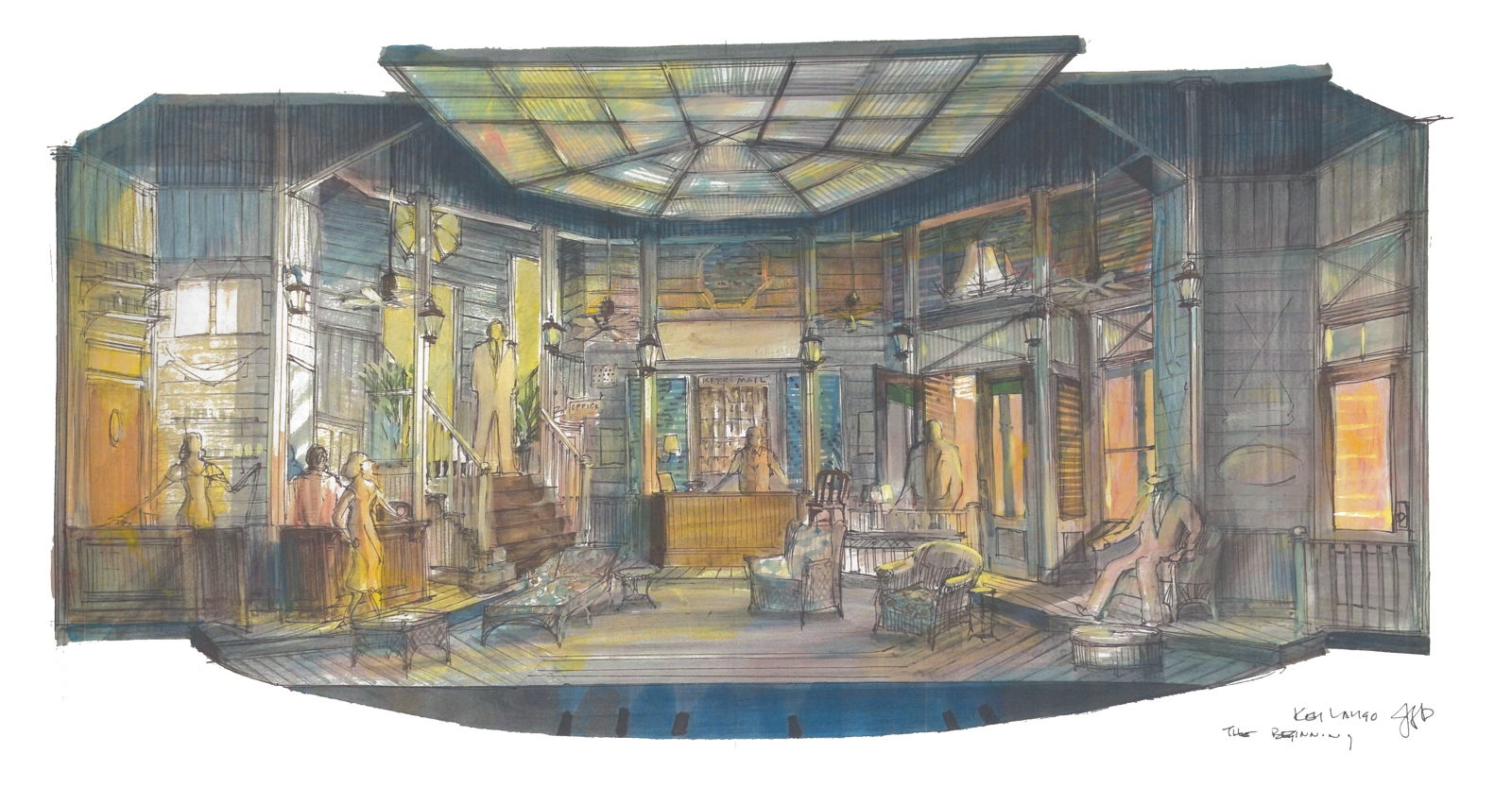 Was there one image that you saw that inspired your set for Key Largo?

Actually, it went in reverse. I drew an octagon fishing resort in Key Largo, and then I started looking at pictures of resorts in Florida built in the teens and 20s. I found one, and I thought, “Oh, that’s funny — they have a central sort of octagonal tower with wings coming off of it.”

What is it that you are drawn to in a project these days?

It’s always fun to do something you haven’t done, so that’s why I’m attracted to new plays and new musicals. Key Largo is a new play — it isn’t just the old play or the old movie, it is a new creation with a different sensibility. As much as we know it as a film, what we’re doing is very theatrical.

Returning to the idea of the hurricane — director Doug Hughes, in his first rehearsal remarks, called it a character in the play.

What can you share about the process of creating a hurricane on stage?

We are trying to make scenery that’s hurricane-friendly. I’ve done a lot of rain on stage before. In fact, the last two Geffen plays I did, The Country House and Time Stands Still, both had rain. But this is “mega-rain.” Obviously, waterproofing was where we began technically. We’re not in a movie — we’re in the theater — so we’re setting up something that has to be repeated every night and can be cleaned up at intermission. And we’re dealing not only with a hurricane — we’re dealing with blood, and a lot of this scenery is starting to be fairly animated. Things are spinning, things are falling over, windows are broken and wind and rain and palm fronds swaying in the breeze — there’s a lot of scenic activity that we’re dealing with. The playwrights have laid out a sequence of storms that all of our meetings have always acknowledged. So, it’s not been just free-form — we’re following the script even when we’re hurricane-ing ourselves.