Life Imitating Art: A Picture Tells a Story, But Not Always the Right One

By now, you've likely seen the Geffen Playhouse's line-up of photographic images representing each show in our 2019/2020 season. Our goal was to create sharp, whimsical, and provocative visual representations of all of the plays in our season. But as we recently experienced, that which is provocative to some can be hurtful to others.

In Larissa FastHorse's brilliant comedy The Thanksgiving Play, the characters are tasked with creating a culturally sensitive play for an elementary school pageant honoring both Thanksgiving and Native American History Month. Despite their attempt at being hyper-politically correct, the characters find out that it's not as easy as they thought for three white thespians to devise a play that authentically represents Native Americans in a way that completely avoids any whiff of cultural appropriation or unintentional misrepresentation.

From this awkwardness, Larissa has mined the comedic gold that has made The Thanksgiving Play one of the most produced new plays in the American theater.

After reading the script, I (a non-Native American) was tasked with creating imagery that would appeal to a broad audience and capture the spirit of the play. Consulting with Larissa and director Michael John Garcés, we aimed to produce an image that intentionally lampooned what a "woke" white person might think is appropriate - and then go in the opposite direction.

So, we created an image featuring arrows piercing a pilgrim hat being served up as the main feast on a dining room table. In our eyes, the image represented a tongue-in-cheek nod to the humor of play's characters, whose struggle ultimately ends up tying them in knots - to the point where the characters even devise a violent (ie: honest) scene where the settlers attack the "savage" natives with an oh-my-god-should-I-be-laughing-at-this? ending that I won't spoil for you.

In our attempt to capture the essence of this over-the-top absurdity, we inadvertently tied ourselves into a knot of our own.

After we released the season brochure and imagery, Larissa was contacted by a Native American person in Massachusetts who saw The Thanksgiving Play image and noticed that it bore a striking resemblance to the old Massachusetts Turnpike sign, which was replaced in 1989. In their message to her, they acknowledged that although they understood that the play is a comedy, the image triggered a hurtful reminder of a painful time when Native Americans lobbied to have this imagery removed. 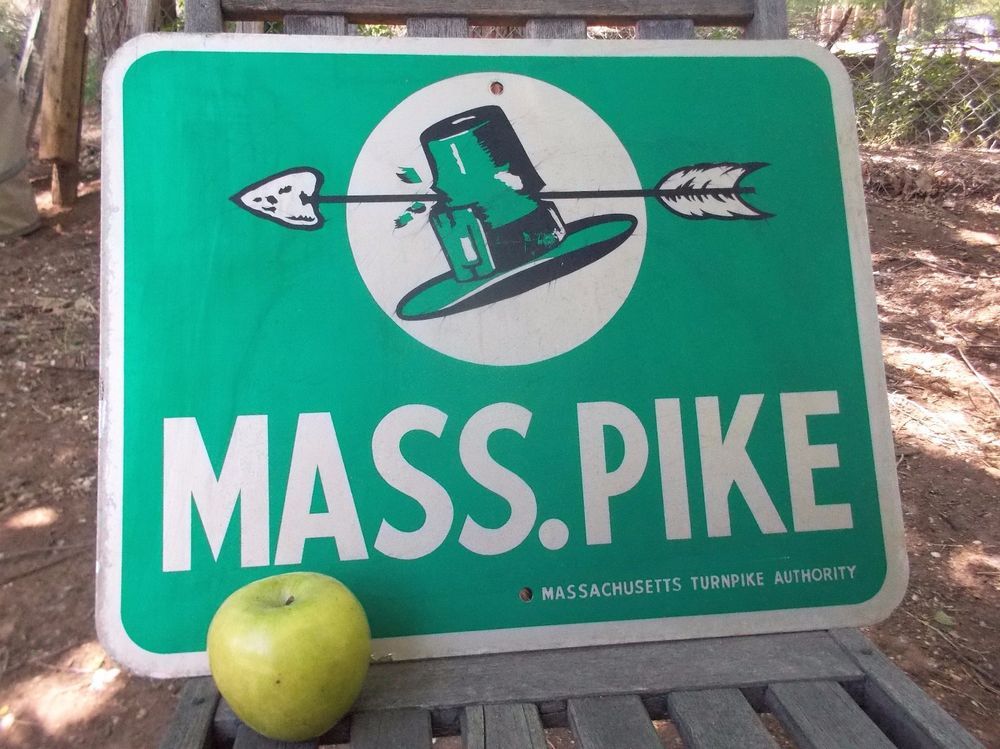 Now, did we intend to replicate a racist symbol that adorned every on- and off-ramp sign to a major American highway? Absolutely not. My instinct was to create a counterimage that turned the traditional Thanksgiving story on its head with a "stick it to the man" vibe. That was the true intention behind the original photo. But as a non-Native person, was it even my place to try to make this point?

In a twist of palpable irony, this is the exact question posed in the biting satire of Larissa's The Thanksgiving Play.
In consultation with Larissa and Michael, we ultimately decided to remove the arrows from the pilgrim hat in all of our future materials. Keeping the original image is not worth the pain it has created, or may create for others. In many ways, all of us at the Geffen Playhouse have benefited from this meta experience, which has made us think twice about how to create imagery and talk about the art on our stages in thoughtful, genuine ways.

I considered myself a fairly "woke" guy until I realized that I was relying on lame comedic tropes to promote a play with comedy that's light-years ahead of its poster image. On behalf of myself and the Geffen Playhouse, I'd like to apologize to anyone who was offended by this photography. We sincerely had no intention to cause hurt or distress. It looks like I still have some more waking up to do.