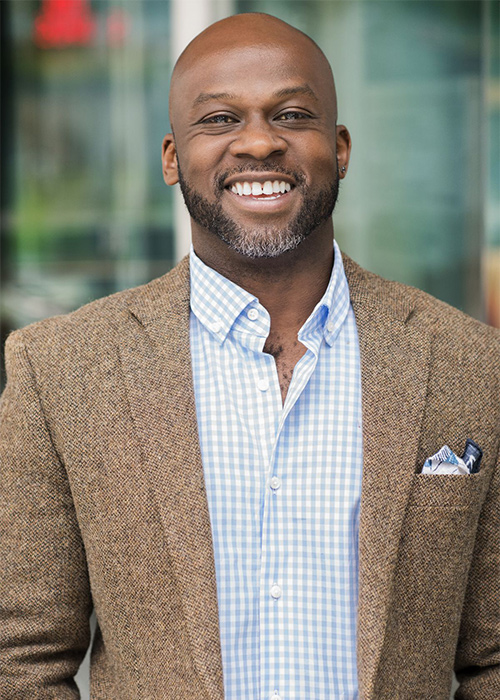 Marc Bamuthi Joseph is one of America’s vital voices in performance, arts education, and artistic curation. He is a 2017 TED Global Fellow, an inaugural recipient of the Guggenheim Social Practice initiative, and an honoree of the United States Artists Rockefeller Fellowship.

Joseph’s opera libretto, "We Shall Not Be Moved," was named one of 2017’s “Best Classical Music Performances” by The New York Times. His evening-length work created in collaboration with composer Daniel Bernard Roumain, “The Just and The Blind,” was commissioned by Carnegie Hall and premiered to a sold-out house at Carnegie in March 2019. His upcoming piece, “In His Name,” is inspired by the forgiveness exhibited by the congregation of Emanuel AME church in Charleston, and will premiere at The Perelman Center in New York in 2021.

While engaging in a deeply fulfilling and successful artistic career, Bamuthi also proudly serves as Vice President and Artistic Director of Social Impact at the John F. Kennedy Center for the Performing Arts in Washington, DC. He has lectured at more than 200 colleges and has carried adjunct professorships at Stanford and Lehigh, among others. His TED talk on linking sport to freedom among immigrant youth has been viewed nearly 1 million times, and is a testament to his capacity to distill complex systems into accessible and poetic presentations.

Bamuthi's community development philosophy, called "The Creative Ecosystem," has been implemented in dozens of cities across the United States and is the subject of several critical writings, including one of the seminal essays in "Cultural Transformations: Youth and Pedagogies of Possibility", published by Harvard Education Press. Bamuthi is the founding Program Director of the exemplary non-profit Youth Speaks, and is a co-founder of Life is Living, a national series of one-day festivals which activate under-resourced parks and affirm peaceful urban life. His essays have been published by Harvard Education Press. He is also in high demand for his creative approach to organizational design and community mediation, and has been enlisted as a strategic partner or consultant for companies ranging from Coca Cola to Carnegie Hall.