The Present: A Grand Finale for Everyone

Shortly after the arrival of the COVID-19 pandemic, the Geffen Playhouse, like all theaters, had to pivot and figure out a way to survive until the time came again when audiences could gather in a darkened theater to experience live performance. (Aaaand… we’re still waiting.) By fortune or serendipity, magician and longtime Geffen collaborator Helder Guimarães had just the thing.

“We were searching for a unique show that was more than a passive online viewing experience,” says Geffen Playhouse Artistic Director Matt Shakman. “I noticed Helder was offering personal shows on his website and thought perhaps we could scale this up to a larger production. After discussing this possibility with Helder, we came up with an idea that we would deliver magic in boxes to audience’s homes ahead of their interactive show… and then blow their minds.”

The Present emerged. This new show was developed at a breakneck pace despite the Herculean logistics to overcome—from sourcing boxes and their magical contents to mounting a production where the entire team from director, performer, designers, crew, to staff were operating a show from their own homes. The gamble paid off, and The Present had audiences and critics raving. 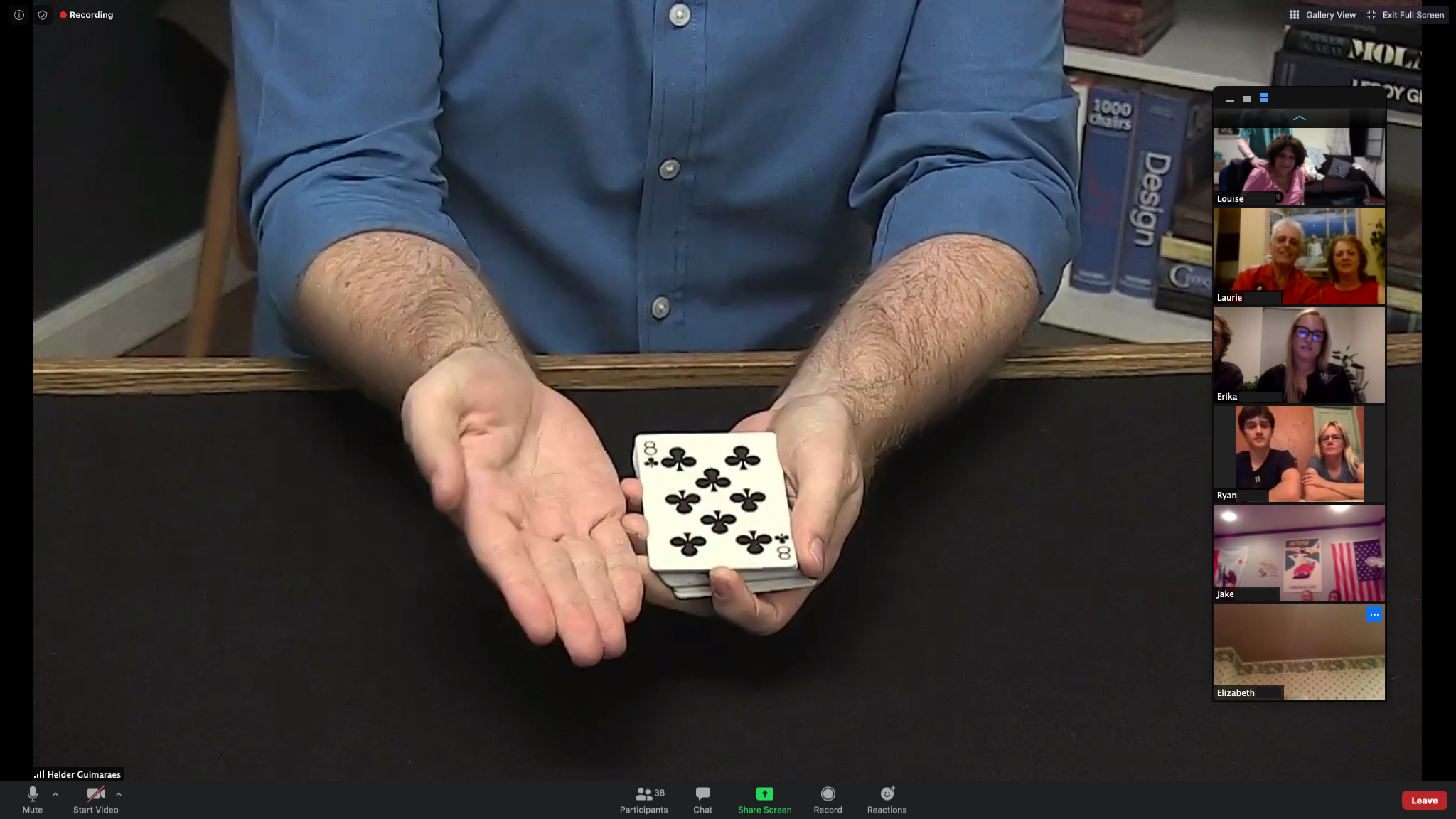 “Because I’m committed now to the belief that Guimarães is an extraterrestrial landed among us to share his superpower to boggle the human mind. And because in an era of rampant transparency, a bit of theatrical mystery restores one’s faith in the essential art of exuberant deception.” 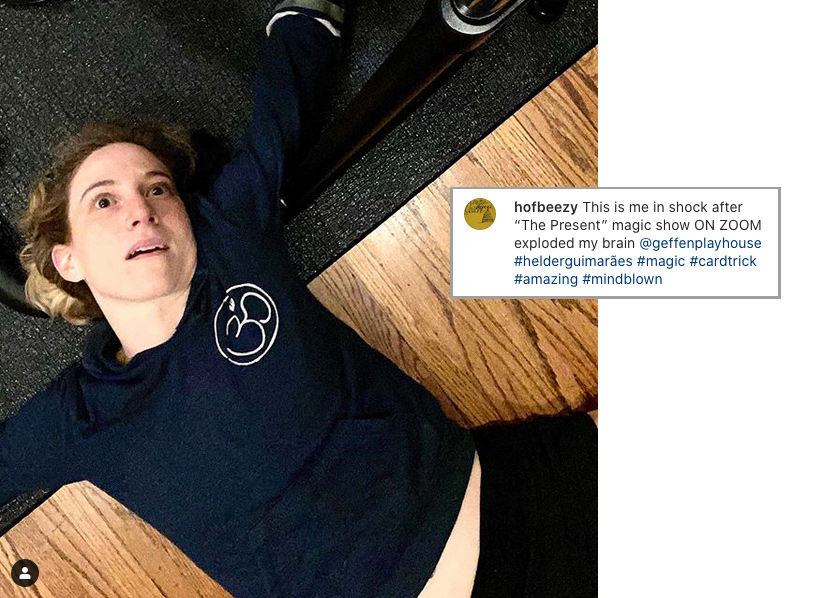 A HIT SHOW, BUT NOT ENOUGH TICKETS

Because of the highly interactive nature of the show, there were a limited number of participant spots available, and supply was unable to keep up with demand. Web traffic for tickets nearly buckled the Geffen Playhouse website and multiple extension weeks sold out within minutes. The Present became a cultural quarantine phenomenon for those who want to escape to an evening of theater, but up until now, only a limited number of people were able to get into the show.

A GRAND FINALE FOR EVERYONE

As the popularity of The Present soared, the production team couldn’t help but be a little disappointed that many people who were excited about the show would not have the opportunity to see it. “What if we created one blow-out performance at the end of the run that everyone could see,” proposed Helder Guimarães. “We could open this show to a global audience and everyone could share this experience.” The grand finale seed was sown.

On Saturday, October 17 at 6pm (PDT), a group of 24 invited participants comprised of special guests will participate with Guimarães in the grand finale Zoom performance. Audiences will be able to purchase viewing-only tickets for $25 to watch on Stellar, a brand-new app that will be launched with The Present: A Grand Finale, which delivers exceptional theater experiences on every device. Audiences can request a mystery envelope to be mailed for just $15 more ($25 international), including some of the same contents from the original mystery boxes, allowing everyone to experience the magic of the show in their own hands. 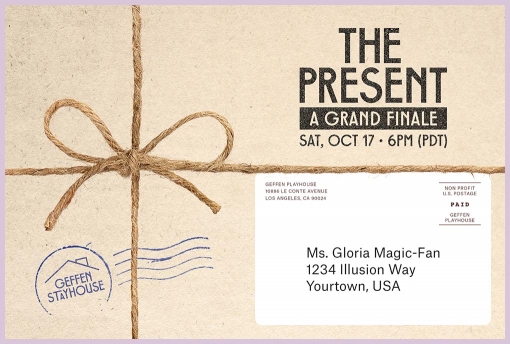 By adding on a donation of $10 or more, audience members will be entered for a chance to win an upgrade to be one of the 24 interactive spots in the grand finale Zoom performance with Guimarães and special guests. There will be a total of 10 spots available for this contest. 100% of these tax-deductible donations will benefit the COVID-19 emergency relief funds for The Actors Fund and Arts Administrators of Color Network, both of which provide direct assistance to artists, crew, administrators, and other entertainment professionals currently experiencing financial hardship due to the pandemic.

The evening will be a global celebration after 6 months of shows that have brought together thousands of patrons for live theater in their homes during this strange and difficult moment in our history.

ABOUT THE ACTORS FUND

The Actors Fund is a national human services organization that fosters stability and resiliency and provides a safety net for performing arts and entertainment professionals over their lifespan. Through offices in New York, Los Angeles and Chicago, The Fund serves everyone in film, theater, television, music, opera, radio and dance with programs including social services and emergency financial assistance, health care and insurance counseling, housing, and secondary employment and training services. Since March 18, 2020, The Actors Fund has provided more than $15 million in emergency financial assistance to over 12,000 people who work in performing arts and entertainment. With shutdowns on Broadway and in film and television, theater, concerts, dance, music and many other areas of entertainment, the need is great and growing. This emergency financial assistance is helping our most vulnerable and those in financial crisis to cover basic living expenses, such as food, essential medications, utilities and more.

ABOUT ARTS ADMINISTRATORS OF COLOR NETWORK

Founded in July 2016, the Arts Administrators of Color Network (AAC) is a volunteer-led arts services network that focuses on supporting the specific needs of Black, Indigenous, People of Color (BIPOC) artists and arts administrators. AAC’s pillar programs include an annual convening, a mentoring program, year-round professional development, networking and affinity space opportunities, and a monthly podcast called Art Accordingly. In 2019, they began the Accomplices Leadership Institute which is geared towards white folks in the arts who are interested in dismantling systems of oppression and racism in their everyday lives and workplaces. In March 2020, AAC created the Arts Leaders of Color Emergency Fund. The Fund raises money specifically for BIPOC artists and arts leaders who are experiencing financial need during the pandemic. As of August 2020, they have raised approximately $110,000 that are being distributed through $200 microgrants.